You are here: Home NewsARRR, Shiver Me Timbers! Half term is Pirate Week at The National SEA LIFE Centre Birmingham

ARRR, Shiver Me Timbers! Half term is Pirate Week at The National SEA LIFE Centre Birmingham

Calling all buccaneers and swashbucklers, an exciting treasure hunt awaits ye at The National SEA LIFE Centre Birmingham during the underwater attraction’s Pirate Week this half term (Saturday 27th May to Sunday 4th June).

There’s treasure a’plenty to be had after a pesky pirate crew got distracted at the aquarium and forgot to guard their gold properly. Now the courageous creatures have hidden the pirates’ ill-gotten gains and are on hand to help little lads and lasses with their treasure hunts.

Are the Gentoo penguins pointing you in the right direction? Could Bev the Giant Octopus have the loot hidden away in her Octopus Hideout? What secrets can Mo the Turtle tell to help you on your way?

Every fearless landlubber who follows the clues to the treasure’s resting place will take home a piece of the loot and a memory to cherish. What’s more, there’ll be pirates on the prowl, seafaring music throughout the adventure and storytelling in the otters’ cave of cautionary tales!

Be sure to come in your own pirate garb to join in the fun and be in with a chance to win daily best-dressed prizes, including family passes, VIP feeding opportunities and goodie bags.

The SEA LIFE Birmingham crew’s very own Captain Chris says: “Can you follow the clues and get your hands on a piece of the treasure? Aye, there’ll be lots of friendly creatures to help you out, so get on down during half term and join the hunt before it’s lost forever in Davey Jones’ Locker!” 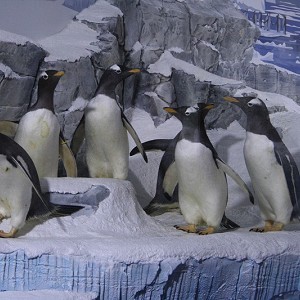 Take a marine voyage beneath the waves and explore over 60 spectacular displays. From the interactive rock pool to the one million-litre 360 degree ocean tun...