You are here: Home NewsChiddingstone Castle announces name of their 'Mummy'

Chiddingstone Castle in Kent recently completed their quest to find the name of the mummy who had been interred inside a 3000 year old Egyptian Coffin on display in the Castle.

Chiddingstone Castle’s Curator Maria Esain said “Our Ancient Egyptian coffin lid that has been exhibited here for many years has undergone some careful conservation and advanced digital imaging by experts from UCL to determine if it is possible to read the name of the person (the mummy) that would have been interred within it 3000 years ago. There is a saying from Ancient Egyptian times that goes: To speak a man’s name is to restore him to eternal life. Therefore, if we were able to determine the name written in hieroglyphics on the ‘foot’ of the coffin then we would be enabling him/her to live forever.”

After 3 days of multispectral imaging: capturing images of the object throughout the electromagnetic spectrum, Dr Kathryn Piquette (Senior Research Associate, UCL Centre for Digital Humanities) and Cerys Jones ( PHD Candidate in Digital imaging applied to Heritage) decided to use an infrared filter, based on their previous knowledge that the pigment Egyptian blue would fluoresce in this filter if present. The hieroglyphs were immediately visible.

After a few days of consulting with experts in the USA and Egypt, Dr Piquette announced that “they are relatively certain that the person to whom this coffin lid belonged to was called Irethorru or Irethoreru”. The translation of the name is “The eye of Horus is against them”. This was a fairly common male name between 664 BC and 30 AD.

With the help of different imaging and processing methods, the UCL team were also able to find two figures of, what appears to be seated goddesses on either sides of the central inscription.

The object is now back on display in its improved display case with additional LED lighting that allows better visibility of the inscription. 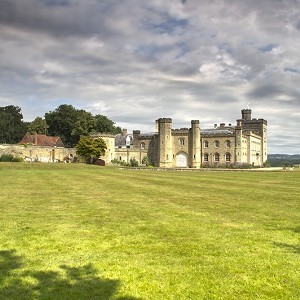 Set in 35 acres of grounds including a lake open to fishermen, a rose garden and a woodland the Chiddingstone Castle is an ideal place to visit. It includes ...