You are here: Home NewsPaddington Bear at The Teddy Bear Museum & Plaza Cinema

Edward Bear, The Teddy Bear Museum’s resident human sized bear, enjoyed a special screening at The Plaza Cinema, Dorchester, of his great friend Paddington Bear’s second adventure in the world of film, which is released in cinemas today.

To celebrate the release of Paddington’s second film The Plaza Cinema has teamed up with the Teddy Bear Museum to offer its viewers a huge 10% off all bears at the Teddy Museum Shop. A must for teddy bear lovers, choose from an extensive range of quality bears of all kinds and specialise in famous name and top brands such as Steiff, Merrythought, Suki, Gund, Deans and a wide selection of shop exclusive handmade bears by top international artists.

Paddington, the duffel coated, marmalade loving bear was born in 1958 from the imagination of Michael Bond. Since then, Paddington has become a great favourite with children worldwide selling over 35 million copies of Paddington books in more than 40 languages. The story books of the exploits of this bear from Peru have never cease to thrill and amuse children.

The Teddy Bear Museum’s special Paddington Display features some exquisite Paddington’s, some of the first Paddington’s created as a soft toy in 1972 by Gabrielle Designs, often limited editions, alongside others including a special Steiff produced to mark his 50th Birthday. As well as many different example of Paddington Bear he is surrounded by much of his memorabilia including books, toys, games and posters. Keeping Paddington company are some lovely examples of rare Aunt Lucy bears.

Paddington is, quite simply, a national treasure and a firm favourite by the many visitors to the Teddy Bear Museum and a great friend of all the other bears – they love listening to his tales!

The Teddy Bear Museum is situated in the centre of Dorchester and is open daily from 10am to 4pm. Visit the website by clicking HERE, for more details. The Plaza cinema is on Trinity Street in Dorchester, you can book tickets online by clicking HERE or on 01305 265454. 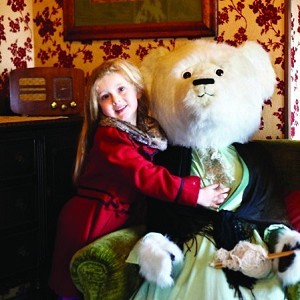 The Dorset Teddy Bear Museum is Dorchester's unmissable family museum, with Edward Bear and his family of people-sized bears, in their Teddy Bear H...