The Resort’s talented Model Making team have created 10cm high LEGO® creations of superstar headliners Ed Sheeran, Radiohead and the Foo Fighters, all performing on the famous Pyramid Stage. The Miniland festival scene takes every little detail into account - from miniature portaloos, tents, festival-goers mud sliding and even a tiny recreation of the famous giant colourful letters that spell out Glastonbury. The scene is made up of around 9,872 LEGO bricks with 5,400 used to create the 50cm high Pyramid Stage.

LEGOLAND Windsor Resort Senior PR Manager, Lauren Moss commented; “Our Model Makers have had a huge amount of fun building this year’s headliners for our Miniland Glastonbury scene – especially creating a model of self-confessed LEGOfan, Ed Sheeran who complete with his miniature LEGO guitar is made up of just 61 LEGO bricks. We think our guests will love spotting the new additions in Miniland which will be on display until the end of the summer!”

The Glastonbury scene joins other world famous landmarks in Miniland, including the 4 metre tall Eiffel Tower and the Coca Cola London Eye, made with amazingly accurate miniature detail. Miniland is one of the most popular attractions at LEGOLAND Windsor Resort that features 12 scenes created from a total of 41 million individual bricks. Guests can see the new Miniland scene at the LEGOLAND Windsor Resort until the end of the summer. 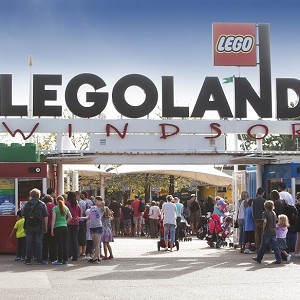 The LEGOLAND® Windsor Resort is a unique family theme park dedicated to children aged 2-12 years old.  The Resort is home to over 55 interactive rid...